Whether you need an old-school hard sell, an ominous trailer read, a regular guy, or a character, Mo brings energy and versatility to your spots. He's been doing it since 1994, including everything from micro-local cable to national television and radio for the likes of Subway, Comcast, and Stride-Rite. A highlight? Playing an oyster, opposite Legal Seafoods CEO Roger Berkowitz.

With a clear, knowledgeable delivery, Mo provides education and training via the magic of interactivity. He likes to keep the energy up, remain approachable, and avoid the cheese factor. Whether it's math, science, history, or reading, Mo has been a virtual teacher to every grade level from kindergarten through twelfth. Plus, he's voiced complete adult courses covering such topics as food safety (Dunkin Brands), retail (American Eagle Outfitters), and pharmaceutical sales (AstraZeneca).

Whether you're making a 90-second explainer video or a 90-minute documentary, Mo's narration makes your production come to life. Serious, informal, sarcastic, or technical, his reads are attuned to the message, clear, and engaging. Big words are no problem; check out his 11-part science documentary for the Harvard-Smithsonian Center for Astrophysics. Mo has also voiced numerous audio books as an approved narrator for the US Library of Congress.

Sometimes what you're trying to say is said best through comedy or animation. In those cases you are going to want a voice talent who has a wide range of characters and accents. With ten years of improv comedy and experience in commercials, e-learning, and gaming, Mo has provided myriad sounds for a variety of needs. Whether you need an aging boxer, an irate oyster, a fuzzy robot, or even a singing plush toy, Mo is your man. He is also fluent in French!

Beginning in September of 2011, Mo has been doing the underwriting announcements for WGBH radio, 89.7FM in Boston. You can hear him on-air, every day, during most station breaks. He also wrote and narrated a piece for NPR's All Things Considered and participated in The Public Radio Talent Quest. In other words, he's ready to tackle your station promotion or podcast production, or even recreate a classic reportage sound.

Voice mail, gaming, live events, and on-camera work are just a few other arenas in which Mo can deliver. He's been a smarmy host for a children's TV pilot, a voice-of-god MC at an awards dinner, and a faux Simon Cowell in an American Idol spoof with real participants. With ten years of improv comedy experience, he's ready for whatever you've cooked up, even if it still needs cooking.

The traditional way! Mo comes to your favorite production studio and records in the booth while you listen in the control room or via telephone patch. With a home base in Western Massachusetts, he can meet you in the studio in much of Southern New England.

If you need the bells and whistles of a full production house and want to be part of the live session but are based elsewhere, not a problem! Mo can record over ISDN, SourceConnect, or ipDTL directly into your local studio, while you hear crisp audio and interact as if he was there. A small surcharge may apply. 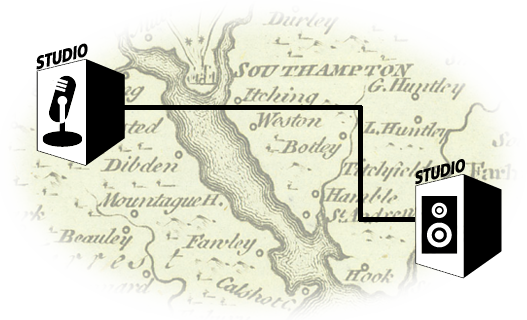 Mo records at his home studio, sending audio files (WAV, AIFF, mp3) via email or FTP. You can send a script and receive the recordings or live-direct the session via Skype. You save production costs. For a sample of audio recorded at his home studio, listen below.

Mo has been providing non-union talent to a diverse set of clients ranging from a local church all the way up to a national fast-food chain, since 1994. He will try to accommodate your budget and schedule.

As a dues-paying non-member (financial core), Mo is permitted to work on all SAG-AFTRA jobs under the normal union rates and guidelines.

He's been doing this since demos were on cassette. He knows what to expect in a variety of situations, he's articulate, and he's efficient. In short, he's good at it.

Mo is often in and out of sessions quickly because clients are satisfied with the results right away. Especially on long-form projects, Mo usually has a consistent pace with few errors. These efficiencies save you time, money, and sanity. When you're often paying by the hour, an inexpensive but less efficient performer may not turn out to be so cheap after all.

From arcane technical narration about Fermi condensates to ads for glow-in-the-dark sneakers, Mo offers the gamut of style, mood, and delivery.

Whether you are talking about cost, delivery method, or schedule, Mo has the flexibility built-in to meet your needs. This is his main gig, so short turnarounds, home-recording, and reasonable rates are all part of the package.